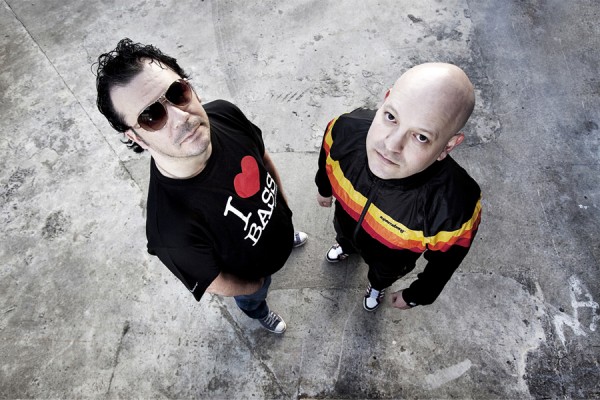 Once so eloquently described as ‘next level shit’ by Grandmaster Flash, British electronic duo Addictive TV create music with a difference; it’s music you can see! Described by Live Design magazine as “inspiring an entire generation of artists exploring the crossover between audio and visual mediums” Addictive TV are best known for their blisteringly dynamic audio/video performances and innovative use of video sampling.

Twice voted number one VJ in the World in DJ Mag, alongside the Top 100 DJ Poll, the magazine said “they’ve become famed for their eye-popping live shows, shredding and cutting film with beats into a heady, mind-meltingly funky mixture”. Remixing everything from Stevie Wonder to Star Trek, their work, described by US magazine XLR8R as “light years beyond the gallery realm of masters like Bill Viola“, is placed between creative homage and surprising re-appropriation and something that wouldn’t have been out of place during the DADA movement had they had the technology!

Addictive TV create their music by keeping the audio and video samples together, so audiences get to see more than a DJ, more than graphics or visuals; they get to experience music in a genuinely unique way! The duo have now performed in more than 50 countries, appearing everywhere from Glastonbury Festival and the Pompidou Centre in Paris to the Museum of Contemporary Arts in Shanghai and even Cairo during Egypt’s revolution! Hollywood studios including Paramount, Universal and 20th Century Fox have all used their movie remixing talents to create alternative trailers for films including Iron Man, Fast & Furious and Danny Boyle’s Oscar winning Slumdog Millionaire.

Addictive TV’s Graham Daniels and mash-up guru Mark Vidler (aka Go Home Productions) have a shared passion for film and music and their parallel journeys through VJ and mash-up DJ cultures, have brought them to where they are now; performing and making music their own way, audiovisually!